The Lions Medical Research Foundation has a long and successful history.  It began as an idea put forward at a Lions Convention in 1963. A Lions member, Mr Arthur Midsen, who at the time was a member of the Board of the Princess Alexandra Hospital, successfully moved a motion at the convention that “Lions resolve to establish a laboratory at the Princess Alexandra Hospital, Brisbane, Australia, in which to conduct research into kidney disease”. Forty Lions clubs supported the project with yearly contributions over a minimum of three years to provide the necessary funding. 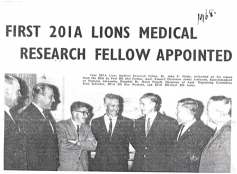 1966     Dr John Healy was the Foundation’s first recipient of funding for research. Dr Healy was working at Georgetown University Hospital in Washington DC, USA, but returned to Australia to become the first Lion’s Research Fellow at the Princess Alexandra Hospital, Brisbane. By 1978, Dr Healy had won world acclaim by publishing nineteen articles and developing the kidney function test which became widely accepted.

1973     A decision was made to name the Foundation the ‘Lions Kidney and Medical Research Foundation’.

1977     The Foundation established a research centre at the Princess Alexandra Hospital.

1978     Dr Don Cameron, Endocrinology. Research into possibility of insulin orally to a diabetic. Dr Cameron was an LMRF fellow from 1978 to 1980.

1978     Dr Owen Harris, Gastroenterology research including pancreatic testing. Dr Harris was an LMRF fellow from 1978 to 1982.

1978     Dr R Cartmill, Urodynamics including urine retention and incontinence. Dr Cartmill was an LMRF fellow from 1978 to 1981.

1985     Dr Robert Tindle, Immunology research into Human Papillomavirus Infections (HPV). Dr Tindle now has an international reputation in the field of HPV. Dr Tindle was an LMRF fellow from 1985 to 1986 and again in 1991 to 1992.

1986     A bright new molecular biologist, Dr Ian Frazer, was funded by the Foundation to research 4h drugs used in the treatment of AIDS. Dr Frazer was about to return to Scotland, but with this funding was able to move from Melbourne to Brisbane to continue his research. Dr Frazer also had ideas on how immunology might provide a vaccine to prevent cervical cancer. The now Professor Ian Frazer went on to a world first in the invention of the Cervical Cancer vaccine Gardasil and became the CEO of the Translational Research Institute which opened in 2013.

1986     The completion and opening of the Lions Kidney & Medical Research Building at the Princess Alexandra Hospital, Brisbane Qld.

1987     Dr Harvey Whiteford, Biological Psychiatry; the funding led Dr Whiteford to establishing the Queensland Centre for Mental Health Research. Now Professor Whiteford has an international reputation in mental health policy and held the first mental health position with the World Bank. Prof Whiteford is now the Kratzmann Prof. of Psychiatry & Population Health at The University of Queensland and Director of Policy & Evaluation at the Queensland Centre for Mental Health Research of which he was instrumental in forming. Prof Whiteford was an LMRF fellow from 1987 to 1990.

1991     Dr George Mellick, trained in chemistry and biochemistry and was awarded a Lions Postgraduate Scholarship towards the completion of his PhD in medicine. Dr Mellick worked in the Centre for Genomics & Bioinformatics in Sweden, returned to Australia lecturing in School of Medicine UQ. He researches neuro-degenerative diseases such as Parkinson’s Disease within Griffith University. Dr Mellick was an LMRF fellow from 1991 to 1993.

1992     Dr Ross Gordon, Pharmacology and Toxicology production of single-chain antibodies. Dr Gordon was an LMRF fellow from 1992 to 1994.

1993   Professor Frank Gardner, Urology research into prostate cancer. Prof Gardener was an LMRF fellow from 1993 to 1994.

1993     Dr John McGrath, research into schizophrenia, genetic and non-genetic causes. He is Queensland’s Centre for Medical Health Research Director, Developmental Neurobiology and Epidemiology. Dr McGrath won the Premier’s Award for Medical Research in 2002 and in 2003 was awarded a Queensland Smithsonian Fellowship. Dr McGrath was an LMRF fellow from 1993 to 1996.

1998     Dr Paul Lovelock, a molecular biologist researching better treatments for Diabetes Type 2. Dr Lovelock was an LMRF fellow from 1998 to 2002.

2000     Dr Peter Madden, Ophthalmology and the development of in-vitro corneal transplant material. Initial examination of Australian made media to allow organ culture of corneas and thereby extend storage from the current 7 days to 30 days. Dr Madden wan as LMRF fellow from 2000 to 2007.

2001     Dr Jonathan Whitehead, Research into insulin resistance in Type 2 Diabetes and links with obesity. Dr Whitehead was an LMRF fellow from 2001 to 2007.

2002     The commissioning of the second floor of the new research building after the demolition of the Lions Building within the Princess Alexandra Hospital.

2002     Memorandum of Understanding between the Diamantina Institute for Cancer, Immunology and Metabolic Medicine and the Foundation was signed.

2002     Dr Jonathan Golledge, James Cook University. Role of diabetes mellitus in artery complications. Work is targeted at development of a medical treatment for aortic aneurysm. Improve understanding of factors involved in the weakening and abnormal dilation of the main abdominal artery. Dr Gollegde was an LMRF fellow from 2002 to 2005.

2004     Dr Graham Leggatt, Vaccine investigation into killer T cells biology so that improvements can be made in the next generation of vaccines targeting tumours and viral infections such as HIV. Dr Leggatt was an LMRF fellow from 2004 to 2007.

2006     Dr Kathryn Buller, Perinatal research determining mechanisms contributing to brain injury in premature neonates due to reduced oxygen and blood flows to the brain. Dr Buller was an LMRF fellow from 2006 to 2010.

2007     Dr Christine Staatz, Pharmacology research tailoring doses of the newer immunosuppressant drugs to improve outcomes after transplants. Dr Staatz was an LMRF fellow from 2007 to 2011.

2007     Dr Gethin Thomas, Osteoporosis research, identification and characterisation of novel genes involved in bone and joint disease, specifically a form of arthritis affecting the spine called ankylosing spondylitis and osteoporosis. This increased knowledge of the disease processes can then give rise to new drugs and treatments. Dr Thomas was an LMRF fellow from 2007 to 2011.

2009     Dr Katrina Campbell, Nutrition-related mediators of cardiovascular disease progression in chronic kidney disease (CKD). Many risk factors for both cardiovascular disease and kidney disease progression, including high blood pressure, vascular stiffness, fluid overload, urinary protein and inflammation are linked to dietary intake. This research aims to identify the relationship between diet and heart health in patients with kidney disease. In addition, this research aims to test the effect of a low salt diet, and other dietary interventions on kidney and heart health. Dr Campbell was an LMRF from 2009 to 2012.

2012     Dr Nadeeka Dissanayaka, researching anxiety and depression in Parkinson’s disease sufferers. Dr Dissanayaka was an LMRF fellow from 2012 to 2019.

2016     Dr Carlos Salomon, Ovarian Cancer research to better understand the origins and causes of Ovarian Cancer, and screening and prevention by altering the profiles of exosomes. Dr Salomon is now an Associate Professor and is a current LMRF fellow from 2016 and to conclude 2022.

2019   Dr Olivia Holland, research into diabetes during pregnancy, and in the underlying mechanisms that link placental dysfunction to pregnancy complications and the later development of conditions such as obesity and type 2 diabetes in adulthood. Dr Holland is a current LMRF fellow from 2019 and to conclude 2022.

Other notable recipients are Professor Ian Frazer who received early funding for his world-famous research into cervical cancer and the development of Gardasil, Professor Lawrie Hirst’s ground-breaking Optical research which led to the Queensland Eye Bank for storage of corneal, Professor Paul Colditz’ Perinatal research into preterm babies and Dr Kathryn Buller’s research which examined brain injury in neonates plus many other worthy researchers.

The QLD & Northern NSW Lions Medical Research Foundation is a Deductible Gift Recipient so your donation will be tax deductible.